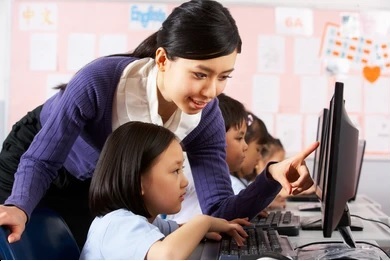 Why IT Teachers are burning out in High Schools

Why IT Teachers are burning out in High Schools
In District Lodhran , a Headmaster attack on a teacher. After it was proved that “the Headmaster try to stop to perform the primary responsibility of Teacher which is Teaching.”

In mostly high schools in Punjab, When the School bell rings, Headmasters says to teacher to perform different activities like clerical work , Dengue , cleanliness of Schools. Some teacher sit with the Heads to entertain them on table of Tea. Some Teachers take students in Grounds for sports period. Remaining start to Read Online Roshni Magazine. So in this situation a IT TEACHER Muhammad Zubair EST CS resist against the Headmaster and says that his primary responsibility is to teach Computer Science to Students. He also says that the clerical work is not responsibility of a teacher. After this the Headmaster do same thing as per do by a Principal in Okara City and Sheikhupura. These Headmaster also use the reference of a old book “Dastoor-ul-Amal” issued / printed by School Education Department in 2004. This book still not amended according to new Policies and Rules of School Education Department. After this many changes occur in School Education Department Punjab. Government make many new Policy. A new cadre was also introduced by Department for revolution in IT field.

But many heads mold these teachers towards clerical work rather than Computer Teaching. Mostly heads at this time in Punjab does not know, how they take the work from their staff.

Before this ,Government of the Punjab take strict action against Female Principal in Shekhupura on request of Ayesha SST CS and another incident was occur in Okara District  where School Education Also take Strict action against a Principal and Remove him from that School after complete inquiry  on request of Qaisar Shahzad SST CS. These all the heads also try to use very old manual of School Education Department Punjab named as “Dastoor-ul-Amal” rather than many amendments and Modifications done by School Education Department.

On the ignorance of heads about latest updates of notification and Policies of School Education Department Government of the Punjab , In Bahawalnagar a warning letter also issued to CEO DEA Bahawalnagar before a few years ago.

Now on incident of same matters occur in District Lodhran where a Headmaster of High School try to insist again and again a Teacher for Clerical Work and Violate the Rules and Policies of Department, After Complete inquiry at different levels , the Headmaster was proved guilty and Department take the Headmaster on disposal.

To
All the Chief Executive Officer (DEA),
in South Punjab.

You are directed that IT teachers may not be engaged in clerical assignments in future and those IT teachers already performing such clerical duties be reverted to their classes/IT labs. The above directions may be complied with true letter and spirit.

Opening of Schools for admin staff only on Monday Tuesday during Pandemic COVIDE-19
Safety measures for school children at the time of opening & closing of Schools
Requisition for recruitment of Lecturers (BS-17) against the direct QUOTA on regular basis
SS Lecturer Education Headmaster PPSC Past PAPER No. 39
General Knowledge Questions Answers PPSC Past Papers No.5
Documents Checklist For Leave Encashment
10th Class Biology Chapter No 6 INHERITANCE MCQs
Action taken against Absentee Teachers in Rajan Pur
Information regarding promotion vacancy position of all categories (Teaching & Non-Teaching)
Constitution of Students Councils in Public Schools in Rahim Yar Khan
Notification Scrutiny Committee to check record Service Regularization for in Service Promotion
Salary of Teachers can not stop after Contract expired in Mandi Bahauddin