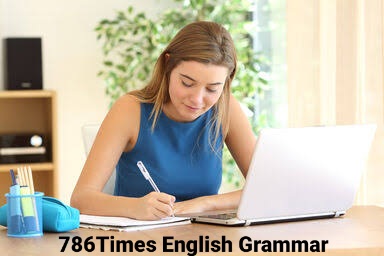 THE PREPOSITION
A preposition is a word used to show the relation of a Noun or a pronoun to some other words a sentence.

He always talks about his wealth.
He does not listen to what his parents say.

(1) A atone came from behind.
(ii) The news was sent far beyond the Atlantic.

5. Disguised Prepositions: The words like ashore, ahunting,o’clock, have disguised prepositions

(i) Whom were you talking to ?
(ii) What point were you insisting upon ?

i) Salem succeeded by means of hard work.
ii) He failed on account of negligence.

THE USE OF SOME IMPORTANT PREPOSITIONS

(i) I have not seen her for a long time.
(ii) She has been absent since Monday.

Both since and from are used before a point of time, but since is preceded by a verb in the perfect tense, while from can be used with any tense :

(i) Saved started rowing from Tuesday last.
(ii) He will start rowing from tomorrow.
(iii) He has been rowing since moring.

Before, by, and within

Before and by are used with a point of time while within is used for a period of time :

(i) She returned before noon.
(ii) She will return by noon.
(iii) She shall return within one hour.

In refers to a position already inside a place or thing while into denotes movement towards the inside of anything :

In refers to a much wider space or time than at :

(i) Sahiwal is in the Panjab.
(ii) He lives at Sahiwal.

(i)The two brothers shared the property between themselves.
(ii)The sweets were distributed among the children.

Except is a preposition while excepting is a participle.

(i)All were present except Ahmad.
(ii) All men are fallible not excepting saints.

PITFALLS IN THE USE OF THE PREPOSITION

OMISSION OF THE PREPOSITION
The direct object comes before the indirect object and both are joined by a preposition. If their relative positions are exchanged, the preposition is omitted:

Many mistakes are committed in the use of prepositions when they are confused or misplaced. In the light of the foregoing discussion on the Preposition. Correct the following sentences :

Words followed by On

Words followed by From

Words followed by With

Words followed by Against

Words followed by For

Words followed by To

Security measures in schools till June 15

@2022 - 786times.com. All Right Reserved. Designed and Developed by PenciDesign
FacebookTwitterYoutube